Kurunai Zentai. The Espada of Destiny

Kurunai Zentai. The Espada of Destiny

Kurunai is of a very dark, yet very skilled level of Espada. He wears a cloak very different from every other Espada's, it is of a black and dark brownish kind of cloak, twisting and turning around his entire body, letting some strands of fabric sway around him as he walks maybe. This clothing is maybe shown to be torn around the edge of the left forearm, and more, the clothing is usually strapped around his legs, shoulders, and torso, and around his crotch area. This prevents it from getting in the way of his attacks and movements. Also the right arm is covered by this said cloak, and helps him with wielding his blade more easily. Unlike human's skin, his is mainly of a gray hue, giving him more of a dark appearance. only few links of chain are found around the flat cloth on his belt going across his waist and to his back, are found, only about maybe one or two. This chain is used for some of Kurunai's attacks. The most of the appearance of Kurunai is mainly unknown until he reaches his other mode. His mask is a shattered empty-expression mask on his right eye and back.

Personality: Kurunai is calm-mannered, but has a blood type of AB, which is a dual, or split personality. His main mood is calm, not very motivated, and doesn't use may high-level attacks unless necessary. His calm exterior makes him the most mature of the Espada's around him. The mannered side of him is quite to the side of being more of a gentleman, than a fighter. But the time will come when he needs to shift over to his other personality, which is total insane rage and skilled dark insanity. The time will come when his attacks will become completely unpredictable, undetectable, and most of all, mainly unbreakable. He is mainly one of the many Espada, that is respected to his immense strength, speed, and overall skill to all of them. Within mere moments, Kurunai can become this demonic side of himself, no matter the situtation.

Looks: Kurunai, in his release mode, is one of the scariest, darkest, and most vile creatures anyone will be able to see, anywhere. His forearms will burst with an armor-like scale substance, covering mainly his entire body, and begin to grow horns along both sides of his head, curving down around his cheeks. More armor-like scales will grow around into a shape of a crescent moon around his backside, and grow into two large wings, about the shape of a real dragon's shape. Within this state also, his eyes will turn a dark red, and the rest of his body a total shade of black, due to the effects of this release. The sword he wields will become part of his tail, which will be about maybe five to six feet in length. The tip will be of the blade, and be of a spiked fashion, instead of a regular straight blade. His Release phrase is, "Awaken from the depths of hell, embrace my body with all your power, let me hear you roar in power, Awaken! Juuchimaru!"

In the far beginning, at the age during when Kurunai was still a living being, he was of an average life, had an average living. He wasn't all too special in any way, yet, he was of a military officer, and had almost thousands of battle tactical strategies in his head at all times, no matter the situation. On his regular day job, he worked as a cook in a restaurant near Kamakura town. When he had heard of damage to the town almost every day, he just had to check it out, no matter what. Using his own knowledge, he was well aware of everything going around him, every conversation, everything. The damage before him seemed all to new, and, from what? Meteors? There were craters, huge slashes in the buildings and the ground. What was going on in the town. That was the main question in his head. Yet, on a walk home from Kamakura Town, his vision caught sight of a hollow, not just any hollow, the dark sense of one. This hollow had a strange mask, and showed some of it's face. It wasn't a new one, but, to him, it was kinda dangerous. Using his own battle tactics, and everything, he still wasn't a match for it. Within seconds, his body was smashed, and his soul eaten. He had become a hollow.

Being released from the hollow realm just days later, he was free to roam, and devour human souls at will. Such great numbers, his mind was corrupted with thought of souls, eating hundreds in just four nights. Alert of this went out from his location, and a high-level soul reaper was departed to his location. He was instantly killed on the spot as the Soul reaper even so much as touched his mask. Such power not only slashed his mask in half, but half of his body too. Being severely injured, he thought he was going to fully die now.

But, when a shining new light came upon him, it was some sort of Kido, Hokkaido, or something. He didn't know the name of it, but was reborn into a Arrancar, a newly reborn hollow with the ability to remove his mask, and to use powers beyond imagination. Who knows what'll happen next, all he knew now was to get to the top. He didn't care of what happened, all he wanted, was power. Killing off any of the high-ranking Arrancars in his way, he bore the first Arrancar position, the First Espada. He was now, kind of the Espada.

The area was cool and refreshing around his thick-skinned body, yet feeling it as if he were human again. Ah, oh so cool. The morning dew on his bare flesh was almost too relaxing. The sun rose gently from the horizon of the western side. 'What a beautiful morning..' he thought to himself, his black iris's looking up at the blue, clear sky above his bodily form. It was always a bore when he was the first strongest Espada in the Arrancar ranks. Both his arms were folded behind his head, giving him a more relaxing way to lay down. His thoughts raced through his mind, his right eye being only half-seen though his hollow mask. the iris showing only halfway. Remembering the days he was just a simple man in a restaurant, to the strongest Espada, made him wonder too much. How did he become the way he was? Was it because, he was military before? Eh. Who knew. Not him at least. He knew everything from his birth to when he was reincarnated into, this thing.

His eyes closed softly now as he parted his lips a bit. "This morning, should be....enjoyed..." his lips were saying without so much as a breath. Speed, Power, Annihilating, Devastating power. Oh how he could control it, the shadows, the darkness itself! So much in one body, in one hand, he could tear down an entire skyscraper with just a flick of a finger. So nice. Thinking of that power he used only a month before, made him laugh just a bit in an insane, yet all so soft and unnoticeable evil laughter. What power he had! Things he would do, no, Could do! He wondered on the very expression of Hueco Mundo, what could he do to annihilate every living being that came in his path?! 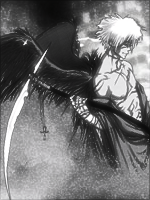 Name: Cero Circunferencia (lit Cicumference Zero)
State: Both
Description: Cero Circunferencia is a Cero that radiates outward, blasting everything within a radius. The distance it travels can be controlled, but it takes an immense amount of energy to use. Blasting a large area more than once or twice can kill the user.


Name: Cero Double
State: Both
Cero Doble (重奏虚閃 (セロ・ドーブル), sero doburu; Spanish for "Double Zero" Japanese for "Instrumental Duet Hollow Flash"), by swallowing his opponent's Cero and returning it back to the user along with his own cero.

Name: Cero Sincrético
State: Both
Cero Sincrético (融合虚閃, セロ・シンクレティコ, sero shinkuretiko; Japanese for "united hollow flash", Spanish for "synchronized zero") is a variation performed by Dondochakka Bilstin and Pesche Guatiche. This attack was first seen being used against Szayel Aporro Granz.[3] In the anime version, Pesche and Dondochakka are shown gathering several separate ceros and fusing them into a swirling ball. Although it does not work on him, Szayel-Aporro admits that it is a "marvelous technique"[4], and that if they had used it at the beginning of the battle (before he had time to analyze their reiatsu) he would have been defeated. However, it does seem to greatly drain Pesche and Dondochakka---both are panting and on the point of collapse after performing it.

Name: Sonido
State: Normal/Resurrecion
Description: A very quick movement performed by Arranacar that allows them to move at high speeds for brief periods of time.

Sorry, Zane. You have to give an RP Sample...although I'm sure most of us do know how you RP.

My shortest Application ever, but done.

Add a wee-bit more to your history. 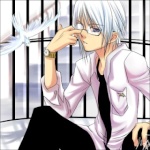 I would say it looks approvable since, Hao said that you need an RP sample and nothing else.